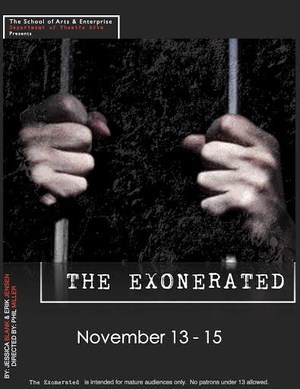 saetix.com
The School of Arts & Enterprise Department of Theatre Arts presents the gripping story of The Exonerated.

Culled from interviews, letters, transcripts, case files and the public record, The Exonerated tells the true stories of six wrongfully convicted survivors of death row in their own words. Moving between first-person monologues and scenes set in courtrooms and prisons, the six interwoven stories paint a picture of an American criminal justice system gone horribly wrong—and of six brave souls who persevered to survive it.

The School of Arts & Enterprise Department of Theatre Arts Artist In Residence, Clayton Fournival is the Lighting Designer . The Exonerated is Directed by Phil Miller.


This powerful docu-drama is intended for audience members 13 years old and above. No Patrons under that age will be allowed admittance for any reason.

THERE IS NO LATE SEATING OFFERED FOR THE EXONERATED.