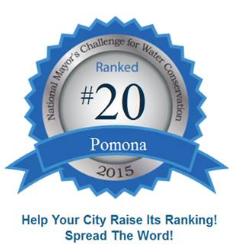 City of Pomona joins Nationwide Challenge to be most “Water Wise”

POMONA, CA (March 30, 2015) –Elliott Rothman, Mayor of City of Pomona, is joining mayors across the country in asking residents to make a commitment to conserve water and cut pollution by taking part in a national contest aimed at drastically slashing water and energy use across the nation – and in return residents can win a new Toyota Prius Plug-In, water saving fixtures, and hundreds of other prizes.

The Wyland Mayor’s Challenge for Water Conservation, April 1-30, is a non-profit national community service campaign to see which leaders can best inspire their residents to make a series of informative changes through easy-to-use online pledges to reduce water and energy usage.

“This competition is in line with the importance of environment issues in our City and being green as outlined in the City’s Green Plan,” said Mayor Elliott Rothman.

Mayor Rothman is encouraging residents to conserve water, save energy, and reduce pollution on behalf of City of Pomona at www.mywaterpledge.com/national throughout the month of April.  Last year, residents from over 3,600 cities in all 50 states pledged to reduce their annual consumption of freshwater by 1.4 billion gallons, reduce waste sent to landfills by 36 million pounds, and prevent more than 179,000 pounds of hazardous waste from entering our watersheds.

To participate, residents enter online at www.mywaterpledge.com/national, and then make a series of online pledges to conserve water and energy on behalf of the City of Pomona.  Cities with the highest percentage of residents who take the challenge in their population category are entered into drawings for hundreds of eco-friendly prizes, including home improvement gift cards, home irrigation equipment, and a Grand Prize Toyota Prius V.  The challenge also features additional resources for resident to take their commitment of conservation even further, from regional water and energy resource issues to cost-saving tips at home.

The 4th National Mayor’s Challenge for Water Conservation is presented by the Wyland Foundation and Toyota, with support from the U.S. EPA’s Office of Water, National League of Cities, U.S. Forest Service, the Toro Company, Wondergrove Kids, Bytelaunch, and WaterSmart Software.