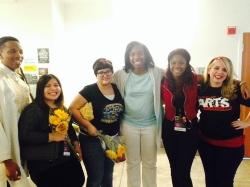 Congratulations to our 2015 Say Word Slam Team finalist
that will be moving on to rep Southern California at
Brave New Voices in Atlanta!
Students performed last Saturday (January 17th) at Say Word poetry slam. For those who are unfamiliar and don't know what a poetry slam is it is a competition using elimination rounds for the reading or performance of poetry.

In order to participate in the slam students had to place within the top three in a prior slam; in November we held an in school slam and Marissa Perez, Erique Jenkins, and Demi Viera placed as slam finalist. Jayla Littlejohn was nominated as a debut poet ( youth poet who did not place, but is provided an opportunity to perform). In December, SAE alum Chris Walters placed as a finalist at Left to Write Spoken word venue. (Left to Write is held at the Studio Theatre, every 3rd Sunday).

The event began with SAE alum Treyvion Bain reciting a captivating poem. SAE poets showed up and showed out in front of an extremely large crowd that included professional actors and actresses. Earning a spot on the Slam team Marissa Perez, Erique Jenkins, and Demi Viera will prepare to compete in the International Brave New Voices poetry slam, by placing as a finalist students earned an all expenses paid trip to Atlanta in July.
Print